The Importance Of Labor Lawyers To The Future of The ALP 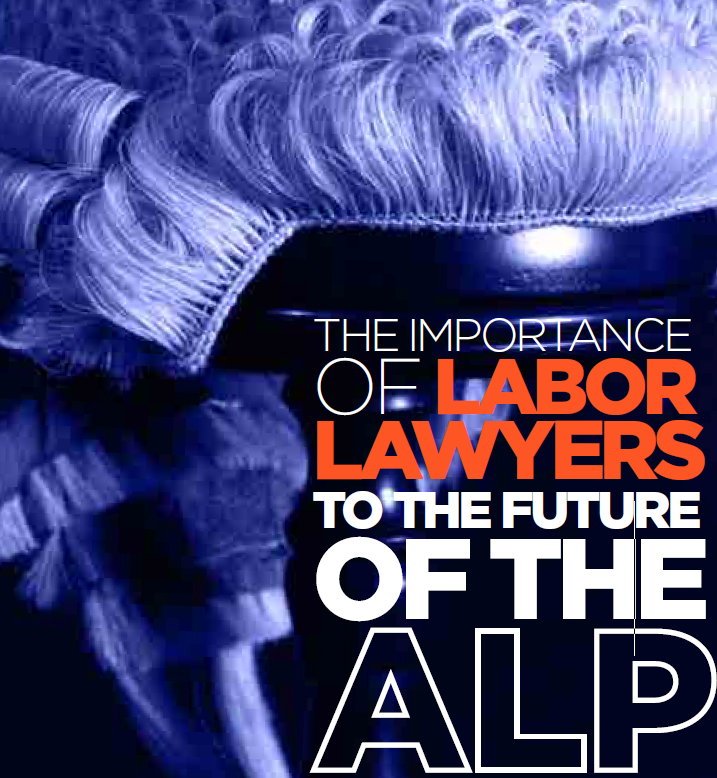 Two words changed the direction of one man’s life and the state of NSW: “Do law”. The advice was from William McKell, who went on to become Premier of NSW, and it was given to a young union official called Reg Downing.

Downing took his advice and became the Minister for Justice in McKell’s Government, amazingly, while still at law school. He went on to become Attorney-General and Leader of the Labor Party in NSW. During his 32 years in parliament, Downing was a minister for 25 of them. Downing’s impact was so great that when the Greiner Liberal Government opened Sydney’s major court complex in 1991, they called it the Downing Centre.

After Downing’s death in 1994, Johno Johnson gave a powerful condolence speech in the Legislative Council. Summarising Downing’s legacy, he said:

Why would a Labor great like McKell advise a young union activist like Downing to study law? Because progressive law reform is core business for the Labor Party and attracting lawyers into the Party has always been central to Labor’s electoral success.

We don’t join the Labor Party to leave things the way they are. We join to achieve change, to make people’s lives better, particularly the lives of people on the margins of our community. The strongest and most lasting way to do this is to change laws that oppress and disadvantage, and introduce new legislation that gives rights and access to opportunity. This is what we mean when we talk about progressive law reform: it is law reform that allows individuals and society to move forward.

Changing the law is often the only way to properly unlock chains of disadvantage and discrimination. For example, it took Labor’s reforms to ensure children born out of wedlock – then described as ‘bastards’ – received equal treatment under the law in NSW. Before the Children Equality of Status Act 1976, no amount of government spending on education or community programs could give these disadvantaged children the rights they deserved. It took a reforming Labor Attorney-General to abolish the idea that a child born out of marriage was filius nullius (no one’s son), and confirm in law that a child is always the child of their natural parents.

Similarly, it was Labor who removed discrimination against same-sex couples and their children from a swathe of Commonwealth legislation. Before the Same-Sex R e l a t i o n s h i p s (Equal Treatment in Commonwealth Laws – General Law Reform) Act 2008 was passed, no amount of talk about equality could give same-sex couples the same entitlements as heterosexual couples.

These reforms show law has a power that policy does not.

It is dead wrong to suggest only lawyers can deliver progressive law reform. But lawyers have a head-start on the task. Legal training helps with the interpretation of legislation. Vocational experience in the law shows how the law really works in practice, exposing the gaps, grey areas and niggly clauses that have unfortunate results. Most significantly, the experience of applying the law gives lawyers an acute understanding of its oppressive power. Lawyers know better than most the gulf that often exists between law and justice.

The experience of working as a lawyer also gives Labor politicians the confidence and motivation to pursue progressive law reform. Former High Court judge Michael Kirby argued as much when he said: “If a political leader were actually interested in law reform… much could be achieved. But if the leader was not a lawyer or, even if he was, was not especially interested in the subject, legal reforms were much harder to accomplish. Law reform reports would lie unread and unimplemented.” The late Neville Wran is a good example of this. Before he entered parliament he was a senior barrister with 20 years of legal experience. He was known around the Sydney bar for his prodigious work ethic and incredible attention to detail. Once in parliament, Wran put his legal background to good use and pursued law reform with vigour. During the time that Wran was Premier: Homosexuality was decriminalised; The death penalty was abolished; Crimes targeting the poor, like begging and busking, were repealed; Anti-discrimination legislation was introduced; and The NSW Legal Aid Commission was established These were not all easy reforms. Some were ahead of community opinion and may not have polled well at the time. However, as the “Wranslides” of 1978 and 1981 prove, brave law reform is not anathema to electoral success.

LAW REFORM IS THE BEATING HEART OF THE LABOR MOVEMENT

But the connection between Labor and progressive law reform runs deeper than the successes of lawyers who enter parliament. Progressive law reform is not merely something that lawyer-politicians are interested in. Rather, progressive law reform is central to what sets Labor apart from the Liberal and National parties. Why do conservative governments, as a rule, shun progressive law reform? Because progressive law reform changes rights and obligations, and this upsets the interests of the powerful. Two Labor law reforms, which each created a new form of property rights, are good examples of this. When the Keating government introduced the Native Title Act in 1993 it created a new type of property right for Aboriginal people. This law reform directly affected indigenous Australians on the margins of the Australian community, aiming to draw them closer into the centre of national life by offering legal recognition of the land that had always been theirs. The conservative parties opposed this policy from the beginning and did nothing to contain the offensive call-cry, “they’ll take your backyard”. They opposed native title because it threatened the interests of the pastoral and mining industries. Labor supported native title recognition because it was just and right.

The debate about a price on carbon has followed a similar pattern. In passing the Clean Energy Act in 2011, the Gillard Government created a new form of property right – the “carbon unit”. Abbott won government opposing this reform, and has since passed legislation removing the price on carbon. Labor has continued to support regulation of carbon emissions because, again, it is the right thing to do. Progressive law reform takes gumption. It requires a commitment to justice that overrides a desire for popularity. This attitude to government and law reform is in Labor’s DNA. It is literally carved in stone above Ben Chifley’s final resting place: “…if an idea is worth fighting for, no matter the penalty, fight for the right” It is there in the words of Gough Whitlam: “when nothing is controversial…it must be that nothing is changing” And if we are serious about rebuilding the Labor Party, and winning back government in Macquarie Street and Canberra, we must continue to carry this attitude to law reform. One way to help us do this is to strengthen the links between Labor and the legal profession.

THE FUTURE OF LABOR’S RELATIONSHIP WITH THE LEGAL PROFESSION

Over the decades, there have been some great examples of Labor parliamentarians working in partnership with progressive lawyers. Take this piece of Labor folklore: Early in 1972, two barristers, Mary and Clyde, walked into a bar. The barman said, “Women aren’t served here”. Mary told the barman, “My mate Clyde here doesn’t need to be served a woman, he has his own, and I’d rather like a drink”. Clyde was as shocked as the barman – who knew sexual discrimination like that still existed in the 1970s? Clyde went on to become Minister for Industrial Relations in the Whitlam Government, and when he did, he hired Mary to argue the Equal Pay case for the government. Mary went on to become Chief Justice Mary Gaudron, Australia’s first female High Court judge.

Sadly, over the last decade, the senior ranks of the legal community have been slipping away from the Labor Party, as a comparison of old and new membership lists will reveal. We haven’t had a lawyer as Premier since Wran; while that’s not the reason for the drop-off, it may be symptomatic of some larger issues. Some in the profession argue Labor has curved in on itself, lost its zeal for law reform and almost forgotten the capacity of professional communities to challenge, inspire and add depth to the Labor cause. If progressive law reform is the beating heart of the Labor movement, then re-engaging the legal profession is a critical part of rebuilding. Labor needs more lawyers in parliament. But more than that, Labor needs a more open dialogue with the legal community. This is where the NSW Society of Labor Lawyers comes in. The Society was formed in 1977 and was active for many years. After a hiatus, the Society was re-formed in 2011. In two years, the Society has grown to more than 170 financial members and several hundred subscribers. Our members are law students, young lawyers, established practitioners, legal academics, senior barristers, tribunal members and judges. We come together to engage with current issues and provide a progressive legal voice in public debate. Not all our members are members of the Labor Party, but we all want to see Labor producing progressive law reform and sound legal policy. In each of the last two years, we have produced a publication called Legal Tweaks, which highlights how the law can be changed for the benefit of the community. We are committed to working constructively with Labor, in opposition and in government, to achieve this goal.

Reg Downing was an impressive Labor leader, even before his life took a legal turn. He was a leader of a trade union, had served on the Party’s National Executive and had been General Secretary of the NSW Branch. His Labor credentials were already rock solid. And yet McKell’s advice to him was still, “do law”. McKell was onto something. Understanding the law, and being bold enough to reform it, is often the best way to achieve the profound and lasting change that the Labor Party exists to deliver. The better we as a Party can “do law”, the more successful we will be.