Primaries: Fear and Loathing On The Campaign Trail 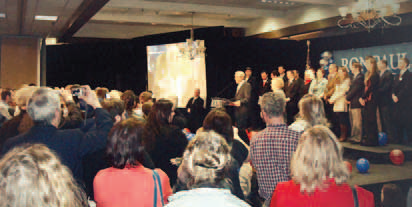 Earlier this year, Kaila Murnain visited the United States to watch Presidential politics up close and personal. This is her account from the frontlines of the Republican and Democratic campaigns.

It’s 6am, and I’m driving from New Hampshire to Maine. This is only the second time I’ve ever seen snow, and the first time I’ve driven on the right-hand side of the road. Some would call it a dangerous combination. I’m on a mission to see a United States presidential caucus in action. I’ve been in the States for 10 days now, meeting representatives from the Democratic National Committee, Democratic Party Consultants and Labour Unions. I’m here to learn about how the Australian Labor Party might undertake primaries in Australia – and I’m looking for the latest campaigning techniques to bring home. I’ve been lucky to see a primary in action down in Florida, and I’m now heading to Maine for my first caucus. Thanks to my – at best – tenuous links with the Republican Party, I had to rely on a stab-in-the-dark email to get to the caucus in the first place.

Maine Republican Party Executive Director, Mike Quatrano, emailed suggesting I visit a little town called Sanford. Following Mike’s advice, I arrive at the school about 20 minutes after the caucus has started. As it turns out, snow really does slow you down. The car park is full of sports cars and shiny four-wheel drives – and it is very clear the Mitt Romney and Ron Paul travelling circuses have come to town. Only a handful of lonely Rick Santorum and Newt Gingrich placards are scattered around the parking lot. I arrive at the same time as what appears to be the only Gingrich staffer in Sanford, who, in his $2000 loafers, struggled with a box of ‘chum’ (chum is the name US politicos give to merchandise, as supporters ‘eat it all up’). I don’t offer to help.

Inside, the energy of the room is high. Ron Paul has just addressed the 400-large audience perched in the bleachers of the gymnasium. Wading through a sea of veterans and well-to-do retirees, I introduce myself to some of the county chairs. It appears young women aren’t that common a sight at Maine Republican events, so I’m a bit of a novelty. Organisers from each campaign approach me, asking where I’m from in the hopes I might be another supporter in their tent for the vote later on. I experienced something similar a week earlier in Tampa, Florida, at Romney’s election night rally during the Presidential Primary. There was a clear lack of young faces in the room – which inevitably meant I was cornered by a Romney supporter and asked to sit directly behind him during the main address, in the ‘visible’ section of the audience. I respectfully declined, though not without feeling a pang of guilt – it is often my job back home to identify and strategically position faces for the cameras.

Here in Sanford, the room suddenly bursts into applause as Romney enters 20 metres from where I stand. His rousing speech receives a standing ovation. In response, Paul’s supporters begin chanting his name: ‘Ron Paul! Ron Paul! Ron Paul!’ Romney has changed his tune since I first saw him in Florida. We now see Romney the performer, rolling out a cavalcade of dramatic attacks on Obama – much to the crowd’s delight.

Naturally, I’m suspiciously incapable of clapping or cheering at the vitriolic anti-Obama slurs flowing from Romney’s mouth, and I begin to attract stares from the die-hards in the crowd. My anxiety dissipates when finally a Republican office holder divides the room, sending the GOP supporters into different classrooms for the vote. Of the two caucuses, I follow CNN towards the larger gathering. The Chair begins by asking the room to divide to show support for or against a motion allowing the Chair to determine replacement delegates to the State Convention should a delegate resign. As the Chair counts me in the vote, I picture our NSW Labor returning officers, past and present, reeling at the thought.

At the close of the ‘beauty contest’, I sit down with Alan Nelson, who is Chair of the Sanford County Republican Party and a local attorney from Portland, Maine. He shares his thoughts on USstyle primaries, concluding simply by saying: ‘it’s a great system, it just depends who’s running it.’

Later, at the Howard Johnson Hotel in Portland, hordes of young volunteers and international press follow Ron Paul into a room full of adoring fans, most of whom have been imported from Boston. His supporters lament the day’s events, feeling robbed after losing to Romney by only 194 votes. The Republican Party cancelled a caucus last night, claiming a snowstorm would prevent voters from attending. Paul’s lawyers are on the phone frantically shouting about how the Republican Party has stitched them up in a conspiracy of Watergate proportions – closing down what was expected to be one of the strongest results for Paul and deliver him a victory in Maine. I thought the Republican bias had been obvious, but clearly the Liberty fans have only just figured it out. Their belated outrage was growing; cries of blue murder echo throughout the room until Paul steps onto the stage.

Tonight, Paul has discarded his trademark endearing cardigans in favour of a smart dark-blue suit. As he addresses the audience, he speaks about the need to end the War in Iraq, and then continues to advocate the absolute abolition of all governments – including the one he’s putting his hand up to lead. Paul is flanked by 20 young supporters – all men, all 30 years or under. I ask myself: how has this 72-year-old, the oldest in the race, become the Pied Piper of the politically active youth? Some, who previously supported Obama, answer simply: ‘Ron Paul doesn’t support the war’ or ‘he just makes sense’.

Others say it’s because he wants to legalise all drugs, launching into tirades about how ineffective the war on drugs has been and claiming this was the logical next step for America. After all, it’s what the Founding Fathers envisaged. As one journalist in Maine said to me: ‘Ron Paul is many things to many people.’ If you ask me, that’s precisely why Paul is so dangerous. I decide to escape the rally before the ‘Ron Paul Effect’ took hold over me, too.

My next stop is Cook County, Chicago – a safe bastion of blue. Despite Kelsey Grammer’s best attempts to paint Chicago as the underbelly of America – through his role as the corrupt Mayor of Chicago in the new series, Boss – my experience of the windy city is more inspiring than anything. When you enter Obama’s world, the freak show that is the GOP presidential nomination seems a world away.

Today, I’m visiting Obama HQ, where the campaign remains steady and inclusive. I’m a little taken aback by the tight security at Obama HQ. As I enter One Prudential Plaza and explain where I’m going, a security guard looks at me strangely, before handing me a name-tag which reads ‘Call Centre’. My Team Obama contact Kip later explains that while the existence of Obama HQ isn’t a state secret, the team prefers discretion for security reasons. As we reach level Obama, a second security guard requests my passport. According to Kip, the only reason for this is that guests who have visited the office kept pinching the Obama 2012 lanyards attached to the visitor passes. And I won’t lie – for a moment, I’m tempted to leave my passport behind and risk it for the lanyard. The only thing that stops me is remembering I’d need to get back for the Country Labor Conference in Cessnock.

For me, the excitement and trepidation upon entering Obama HQ was how I imagined a high school soccer player would feel meeting their favourite team at the World Cup. Put simply, it was a big deal. A familiar sight hits me, and I immediately sympathise with the adrenaline-fuelled enthusiasm and campaign-induced sleep deprivation resplendent among Obama’s staff, which I’m told has been raging since 2008 for many in the team. We wander past Jim Messina’s office. Helveticaheavy department signs dangle from the ceiling and Obama ‘chum’ lines the walls. There is a low chatter from the some 400 staff in the office. It’s just another day at Obama HQ.

Their philosophy is as simple as it is effective: they empower supporters to take initiative. They see their role as coordinators, not enforcers. Field Directors meet one-on-one with volunteers who demonstrate a capacity for organising. Those volunteers then organise another swathe of supporters beneath them who then organise issues based campaigns in their local communities. There are rewards for those who contribute the most – so people feel like they are getting something in return. Meanwhile, this information is recorded in some of the world’s most comprehensive, meticulous databases.

While the pundits label it an Orwellian approach, political data sharing in the US has morphed into something more organic and exciting – a twoway street of information. The new Obama machine enables people to participate in the things they care about – allowing them to cut through the clutter and engage in meaningful dialogue with their political party and candidates of choice. Activists can participate in the campaigns they care about – not what focus groups are telling them they should care about. They have more access than ever before. Team Obama has come a long way since 2008. The staff reminisce about the last presidential campaign, and I find myself wishing I could turn back the clock to 2008 to experience the excitement around caucuses and primaries with them. I only hope that all of the Obama supporters of 2008 re-emerge. It isn’t going to be a walk in the park for the President, and I don’t envy the enormous task at hand.