Labor And The Digital Revolution 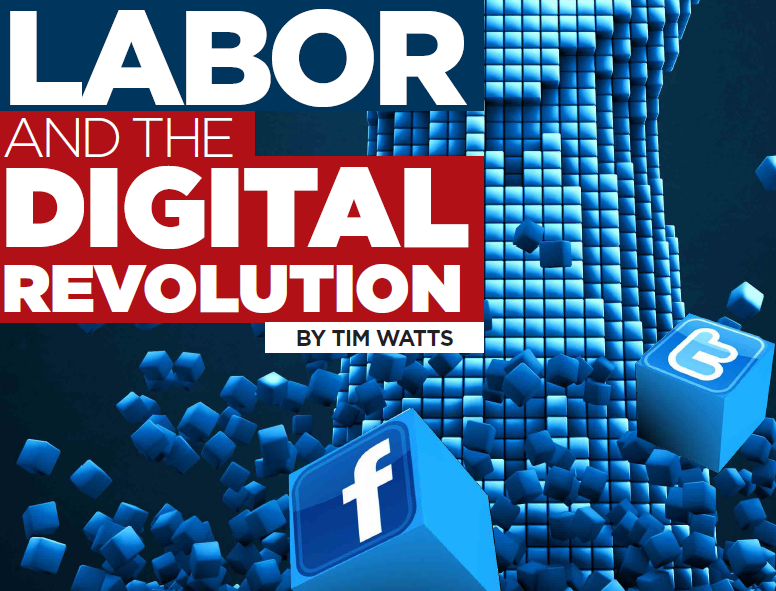 The word ‘revolution’ is over-used. But one of the few true revolutions we have experienced in our society over the past decade has been the impact of the spread of digital technology on the way people communicate.

Consider that the first iPhone was released in this country in the year after the Rudd Government was elected. Barely six years later, more than 70 percent of the Australian population own a smart phone. All of whom now have a computer processor in their pocket more powerful than those used by NASA to put a man on the moon 50 years ago.

However, the most important aspect of the digital revolution is not technology, it’s people. The Internet has made it dramatically easier to find other people who are passionate about the same things you are, to share information with these people and then to collaborate on producing altogether new information with others within these communities, often for non-financial motivations.

This new mode of production – peer production – has brought us a series of what Australian economist Nicholas Gruen has called emergent public goods. Goods that are created by communities in response to private needs, but which have spill-over public benefits for the rest of us. Goods like the GNU/Linux operating system that supports the majority of the world’s web-servers, the Android mobile OS operating on the majority of the world’s smart phones and Wikipedia, the largest encyclopaedia ever produced.

At the same time, social media has allowed specialised communities of interest to form around even the most obscure subjects, producing unprecedented and constantly evolving repositories of technical expertise and culture.

All created by communities, for the benefit of other community members.

As Michael Wesch puts it, in this new age of mass connectivity, “The Machine is Us”.

This revolution is particularly important for the progressive movement. We’re a movement founded on collective action, on people working together for mutual gain. From the early co-operatives, mutual societies and trade unions, progressives have pioneered new institutional arrangements for organising collective action.

The digital revolution has made possible a panoply of new ways of acting collectively, but we have not yet engaged with this change on a philosophical or institutional level. We need to do so soon, as the way we respond to the digital revolution has the potential to become a major ideological divide. It has implications for how progressives should think about issues as varied as tax, defence, trade, privacy and infrastructure investment.

However, before this can occur, progressives must become aware of the ways that government and business can stifle online communities. There are already many examples of this in Australia, particularly in the area of intellectual property.

Intellectual property is an instrument of policy, created by government to serve the public. Despite this, policy makers continue to view intellectual property as an innate property right to be unthinkingly protected by government. This orthodoxy is increasingly buttressed by trade agreements - often negotiated without transparency or democratic accountability - that instead of promoting free trade are increasingly expanding restrictive statutory monopolies.

Australian copyright law, in which all reproduction is prohibited other than specific, narrow exceptions, is particularly problematic and is currently throwing sand in the gears of digital innovation. In the absence of a broad based ‘fair use’ exception, innovations like the Google search engine and the iPod were legally problematic under Australian law upon introduction. Recent Australian legal threats issued against Laurence Lessig and Hugh Atkin for their academic and satirical work respectively further highlight the repressive absurdity of Australian copyright laws.

Further, as ‘Maker’ communities and 3D printing grow in popularity, so too will similar disputes over patent infringement.

In response, progressives should champion a new micro-economic reform agenda to re-evaluate intellectual property law from first principles, focusing on incentives and public benefits, not the mindless protection of statutory monopolies. This process should be led by economists and innovators, not lawyers and rent seekers. Without it, intellectual property will increasingly become an instrument of the protection of vested interests rather than of innovation.

On a more optimistic note, there are many things that government can do to increase the public benefits of online community driven peer production. Data openness, authentication services, privacy benchmarks, standards formation and individual capacity building through digital literacy training would all contribute to the growth of online communities.

As progressives, we must stand up for the new online communities created by the digital revolution. They are our people, acting in a long progressive tradition, and we must be a voice for them. To put it in words that any political hack could understand, to win the 21st century on matters digital, our mantra as progressives must become “It’s the Community, Stupid”.