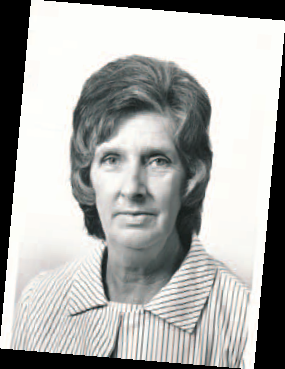 When news came that the grand partnership of Margaret and Gough Whitlam had ended with her death on 17 March 2012, I shed a tear and thought how well matched they had been. Although, like many others of her generation, it was Margaret who put aside any ambition so that Gough might pursue his career while she raised four children almost single handedly.

Margaret was a Bondi girl, delivered at home on 19 November 1919. Her father was William Robert Dovey and her mother was Mary Dorothy Duncan. Margaret benefited from Mary’s swimming tutoring and in 1937 became the Australian breaststroke champion. She was 6 foot 2 inches, strong and slim with a good chance of a medal at the 1938 British Empire Games held at North Sydney pool. But fate intervened and a very sick Margaret, with an infection, came last in the 50-metre breaststroke.

In writing this tribute I acknowledge Susan Mitchell’s intimate and enjoyable biography of Margaret Whitlam, published by Random House Australia in 2006. In this biography we gain glimpses of a young woman who wrote in her journal:

My mind is very mobile. One minute I’m positive I only want to write and then it’s to act on the radio. The only part I’m sure about is that it will have to be something artistic or even just arty... I want to be smooth and witty, elegant and attractive to men with an easy approach to life. At twenty I thought these things would have come but I can see that all my life I’ll be waiting for them to come to me if I don’t make the first move.

The year 1940 was a watershed in her life when at the Sydney University Drama Society Christmas party she met Edward Gough Whitlam. The relationship was slow to start and Margaret dallied with other young men but by May 1941 she was thinking seriously about him:

This is not the usual, elated feeling, I think it goes deeper. I don’t tremble at his touch but I feel a certain concern and interest in everything he does. We shall see.

Eventually Gough asked her father for her hand in marriage. The grand partnership was consummated after they married at St Michael’s Vaucluse on 22 April 1942. Six weeks later Gough was called up and joined the Royal Australian Air Force and served as a navigator in combat against the Japanese.

Margaret served as a commissioned officer in the Voluntary Aid Detachment where she became commandant of the university detachment. She completed her social work studies while working as a probationary nurse at Sydney Hospital where she learned that a bottle did not always mean sauce, beer or wine. Margaret’s life as a wife and mother was no different from many women who gave up their careers to raise a family and support their husbands, especially those who did it almost single handedly.

Like many mothers she returned to the workforce when the children were older, as a part-time medical social worker at Parramatta Hospital from 1964 until 1967, until Gough gained the leadership of the party.

However, unlike many women, Margaret married an extraordinary man who fought political battles, within and outside the Australian Labor Party, and achieved the ultimate political office as prime minister of Australia. The dismissal of Whitlam and the Labor government on 11 November 1975 by Governor-General Sir John Kerr remains a scar on the political history of Australia. It should not be Gough’s career which defines Margaret’s life, but her own contribution to the community and the Labor Party. Journalist Geraldine Pascall recognised her worth in The Sunday Australian in December 1971: She has lived here since 1957 [in the electorate of Werriwa], is a member of the ALP and its women’s conference, a branch delegate to the Federal Electorate Council, does a lot of constituent work, is a trained social worker with a practical concern for everyday problems and the sharp edge of inadequate health services and economic insecurity.

She is an outstanding person in her own right. She’s very intelligent, very observant and she has a great deal of enthusiasm for a wide range of things. I see her as a natural leader. So, for example, she might have been a distinguished MP herself ... I see her as having potentially sacrificed a very important career to be his mentor... She’s got no prejudices about class - she wouldn’t care if you were the boiler-maker’s illegitimate daughter.

As her life became more public, Margaret spoke out for political wives. In 1969 she said:

I do believe that people have come to realise that wives of politicians are personalities in their own right. It’s true that in earlier years we were not such outgoing people and perhaps now we are becoming a bit more brazen.

In 1970 she was indeed brazen, joining the panel of a day-time television programme where her wit and personality shone. At last she was doing something ‘arty’. Later, when she was the prime minister’s wife she would write a diary for a women’s magazine.

In the 1972 Labor election campaign Margaret campaigned with Gough at large public events but also on her own wherever she was needed. She was an asset to the party and to Gough. People who had voted Labor loved them both. Yet there were others who were ready to spread rumours to vilify the couple. Some conservatives could not, or would not, acknowledge that there had been a seismic shift in Australian politics. Throughout the Whitlam government terms of office from 1972 to 1975 Margaret conducted herself as well, if not better, than many other prime minister’s wives. She was truly the First Lady of Australia. After the dismissal it was Margaret who provided the love and ballast needed by a man who had been shocked to the core by the events of 11 November 1975 and the rejection of his government at the December election.

When Labor was rejected again in December 1977 Gough gave up the leadership of the Australian Labor Party. He sat on the backbench until he retired from the parliament on 31 July 1978. A small measure of how the Whitlams are loved by Labor people was demonstrated on the North Shore of Sydney (not a bastion for Labor) when a capacity crowd crammed the Willoughby Civic Centre on 29 September 1978 for a dinner in their honour. This was truly a night to remember and I have a vested interest in the memory as I helped organise the dinner for North Sydney and Bradfield FECs.

Whitlam, as always, was witty and predicted Labor would win seats at the State election on 7 October. (He was right. Miraculously Eddie Britt won Willoughby for Labor, leaving a stunned Nick Greiner defeated at his first attempt. Tom Webster won Wakehurst.) After Gough concluded his remarks the diners spontaneously called for Margaret. I have a recording of what she said:

Evenings like this make it very worthwhile to be ‘also present’. I guess I have been ‘also present’ for a very long while. For many of those years my life was an open book or if it wasn’t they made it up... I’m still teaching English to migrants and I’m on the council of the Sydney Teachers’ College and on the board of the Sydney Dance Company... In Canberra I have been appointed Chairman of the ACT Council of Social Service which is up my alley. I’m a trained and experienced social worker and an untrained but experienced journalist so maybe I can be of some use there. Thank you for showing that we are loved and still wanted.

When the Hawke Government appointed Gough as Australian Ambassador to the United Nations Educational, Scientific and Cultural Organisation (UNESCO) in 1983, Margaret gave up her voluntary appointments to live in Paris for three years. It took her a while to adjust but she loved the city and the food markets.

Later she led educational overseas tours, at first by herself and later with Gough. And she became an author. Margaret’s involvement in community organisations are too numerous to list. She was awarded the Order of Australia in 1983. She received honorary doctorates from Queensland and New England Universities and they were both designated national living treasures by the National Trust.

In 2007 Margaret and Gough became the first Australian Labor Party national life members, awarded at the national conference. Perhaps the accolade she most treasured was Gough’s dedication in his book The Whitlam Government 1972-1975:

To my best appointment, Margaret Whitlam.

Fair minded Australians will miss her. A fitting epitaph may be Margaret’s own words written for the students at Sydney Boys’ High School in the Parents and Citizens’ Association journal of April 1960:

Petty acts and petty speech practised often will not cease at seventeen, so develop your fond heart now. Live and let live so that you, too, may not look back in anger.